Home » Why do we measure stream chemistry?
Back to Course

Show more
Watershed Watch Community Science How to Measure Stream Chemistry? Why do we measure stream chemistry?
Lesson 3, Topic 1
In Progress
← Previous Next→

Why do we measure stream chemistry? 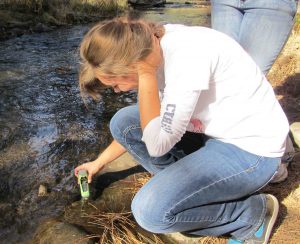 Stream chemistry data tells us about the stressors, exposure, and response of ecological communities in the waterbody as well as the wetland vegetation found in the areas surround rivers, wetlands and streams.  An example of a stressor would be a heavy metal that can accumulate in the tissues of aquatic organisms such as fish that gets consumed by humans such as as mercury from terrestrial or airborne sources.  An example of exposure would be excessive levels of aluminum or copper from stormwater runoff that lasts for several days time or for during one big rainfall event (which also might scours arroyos and streams in the area of intense rain but then dries up after the storm leaves).  Stream chemistry is less able to measure the response of ecosystems since tracing toxins through sampling of organisms is not cheap or easy to do.

Of course, we need to know a lot more about the chemistry of the waters of New Mexico.  The emerging contaminants coming from wastewater treatment plant and nascent efforts by municipalities to start planning for “toilet to tap” recycling of that wastewater for reuse only reinforces our need to know about the impacts on frogs, fish, and other organisms that wetland dependent.