Home » What’s the vegetation abundance and cover?
Back to Course

Show more
Watershed Watch Community Science How do we Measure the Health of Riparian Areas What’s the vegetation abundance and cover?
Lesson 5, Topic 4
In Progress
← Previous Next→

What’s the vegetation abundance and cover?

Plants growing on stream banks are critical to holding soil in place and reducing the movement of sediment, nutrients and other pollutants into the stream channel. A healthy vegetation cover takes up excess nutrients that could lead to excess algal growth, provides shading to reduce water temperatures, controls stream bank erosion and reduces impacts from grazing and recreational activities. Native vegetation species are considered healthier than exotic species, although this is not accounted for in this evaluation. Vegetation cover on the bank, expressed as a percent, is estimated by randomly choosing a transect direction to walk and noting at every other step whether there is vegetation cover or bare soil. Ninety-five percent vegetation cover is considered an adequate cover for erosion control, while less than 40% is considered poor. Scores from both banks are averaged. 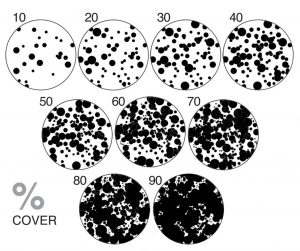